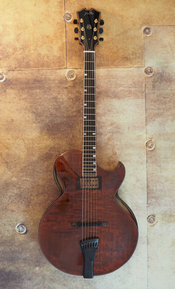 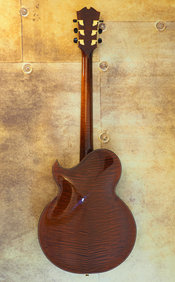 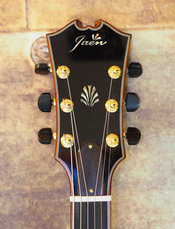 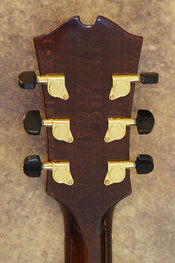 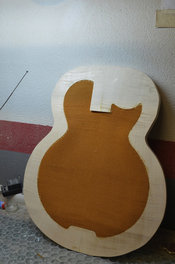 "This is a model that I designed for the 2015 “Holy grail Guitar Show” in Berlin, Germany.

For years, I have been trying to find ways to deal with two apparently conflicting requirements for a jazz guitar: small size and full tone, both acoustic and electric (there is another requirement, at least at the same level as these two, that I will mention later). Then I had the luck of meeting Dr. Samo Sali, a respected researcher in Guitar Acoustics, who told me about the “Double Top” concepts as they apply to Classical and Steel String Flat Top guitars. He heartened me to try to find a way to translate this technique to archtop guitars. After considering several alternatives, I decided to use a method with which I could make top and back plates no matter their three-dimensional shapes, while at the same time being in control of their stiffness at every point. These are in fact important principles behind carved archtop guitars, so I decided to build a new model, the Berlin, worthy of this innovation.

The Berlin model uses “Double” construction for both its top and back. The outside of both plates looks exactly the same as any other carved archtop guitar, because they are in fact carved plates, coming from the same massive Spruce and Curly Maple wedges that are traditionally used for archtop guitars. However, that outer skin is extremely thin, and right below it there is a core made of Nomex honeycomb. The inside of both plates is different, because the top must bear the pressure of the bridge while the back is not subject to great stresses. For the top I decided to be even bolder. If I made it without braces, it would be freer to vibrate; while this would be undesirable for a big box, it could be great for boosting the low frequencies in a small guitar. The result of this construction is amazing: the Berlin model, with its width of 380 mm and its depth of only 60 mm at the edge, has a full voice that places it in the realm of much bigger archtop guitars.

I’ve always had a preference for concealing any new ideas, respecting the traditional designs that I like so much. However, this time I decided to break some rules. I designed those holes at the edge of the top that make it asymmetrical in a symmetrical body. This caused me great concern because the thin sides were exposed and could bend an even get damaged if the player, for example, leaned forward while playing seated. I decided to reinforce the area, using a Nomex honeycomb sandwich again, with complete success.

Most archtops have the fingerboard raised above the top, on what most makers call a neck extension. This is great for improving access to the highest register, and for that reason it even has been copied by some classical makers. However, when there is a cutaway I don’t find any need for it. I prefer a low fingerboard, as in most flat top guitars, glued to the top. I am not alone into this, and have met many players that agree. Apart from this, I liked the idea of making a heel-less design , which many players will find extremely comfortable.

Regarding the electric part, I had a very clear idea from the beginning: the guitar should have a full-size humbucker, installed inside a hole in the top. This is simply because there are many diferent models commercially available, and they are easy to replace; the players that worship a particular pickup or those that are willing to experiment will appreciate this feature. Anyway, I install my own pickups, which are fantastic; they are humbuckers with a wooden (ebony, walnut, cocobolo…) case, and they are adjustable so that you can use the strings of your choice, even bronze. Having a full-size humbucker was a potential source of conflict with the acoustic tone requirement, but I managed to isolate the area where the pickup was located.

The tailpiece has the volume and tone controls integrated. This was one of the few solutions that I had to the problem of placing them, because I could not use the finger rest (not enough room below it due to the lack of a neck extension) and I didn’t want to put them at the top, altering the acoustics of the lower bout. I decided that the tailpiece was a clean and interesting solution, so that’s what I did. The design of this part was much harder than it seems; I even had to modify the thumbwheels, which now are ebony instead of the original plastic. As all my guitars with magnetic pickups this one has the strings reliably connected to ground .

As all my guitars since some time ago, this one has Gold EVO frets, a very hard and nickel free alloy. The ends are hemispherical; when I started making them like that I didn’t find any definite advantage, especially given the time that it takes to shape them! However, after playing them for some time I realized that the frets are sensed more positively so that the player will judge better where he is when playing without looking at the fretboard.

This description would not be complete without mentioning that this model comes in two different styles. The one that appears in the picture above is the “Standard Berlin”, which differs from the “Grand Berlin” mainly in the bindings and inlays, which are more elaborate in the latter. However, I make these guitars one by one in my small shop, so I can make custom instruments where we can agree on a list of specs. And remember that the most important design requirement for me, the one that I didn’t mention at the beginning, is a price tag that a musician can pay."